Mahatma Gandhi Essay in English 10 lines: Mohandas Karamchand Gandhi, popularly known as Mahatma Gandhi was a politician, social activist, writer, and leader of the Indian national movement. In this article, you are going to learn how to write 10 lines on Mahatma Gandhi in english. Here we’ve provided 4 sets of 10 lines on this topic. These 10 lines will be helpful for students of classes 1, 2, 3, 4, 5, 6, 7, 8, 9, 10, 11, and 12. So, let’s begin.

1. Mahatma Gandhi was a  great freedom fighter and social activist.

3. His parents were Karamchand Gandhi and Putlibai.

5. At the age of thirteen, he was married to Kasturba Gandhi.

6. Gandhiji taught us the principles of Truth and Non-violence.

8. It was through his great efforts India got independence from British rule in 1947.

10. His birthday is celebrated as Gandhi Jayanti throughout India. 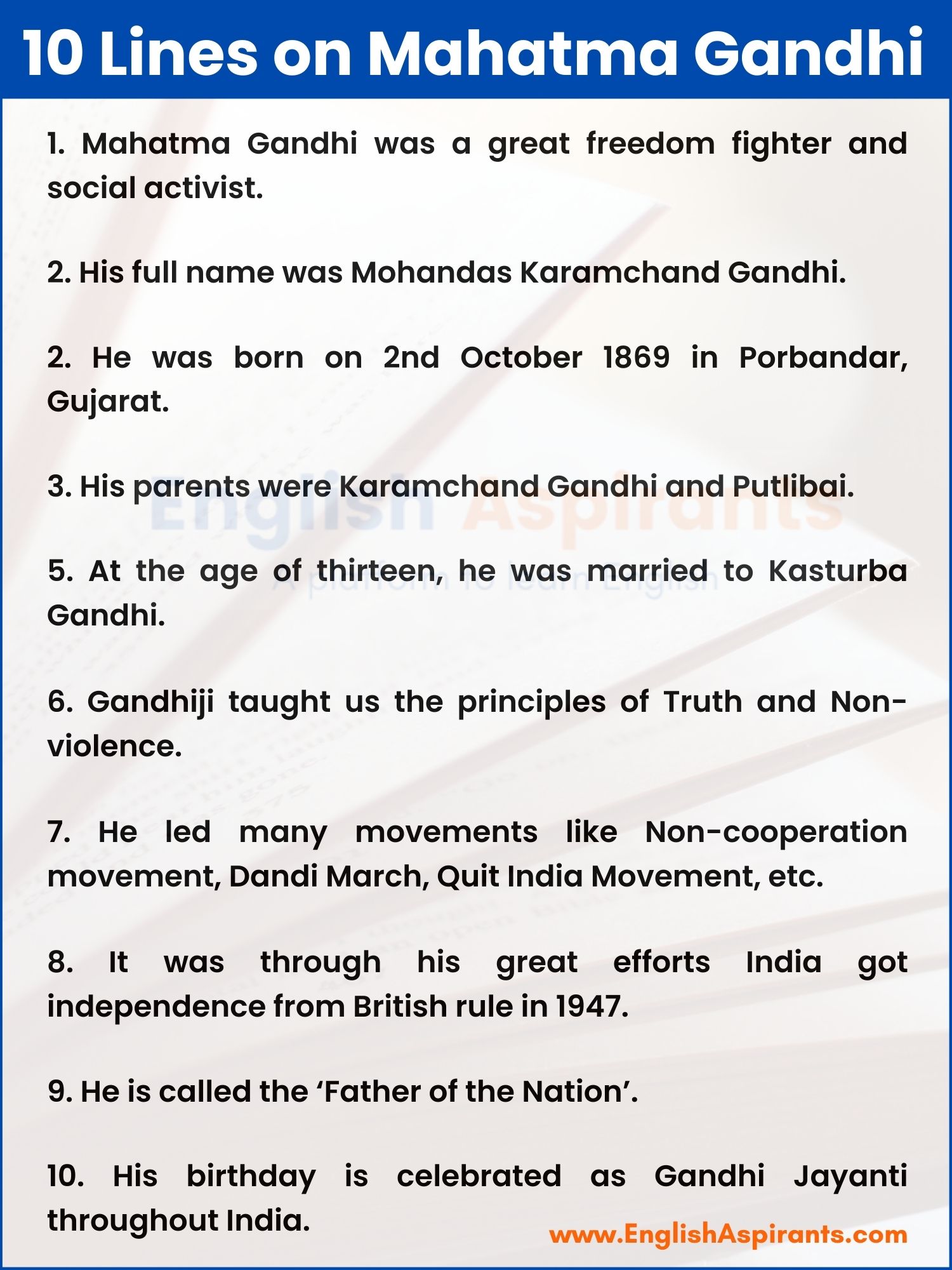 1. Mahatma Gandhi played a great and unforgettable role in the Indian freedom struggle.

2. He fought hard to root out poverty and untouchability.

3. He tried to unite the Hindus and the Muslims.

4. He found the Satyagraha Ashram on the banks of Sabarmati river near Ahmedabad.

5. He was influenced by the works of great writers like Leo Tolstoy, John Ruskin and others.

6. The ideals of Mahatma Gandhi were Satya (truth) and Ahimsa (non-violence).

7. He lead the historic Dandi March and broke the salt law.

8. He started the Quit India Movement in 1942 and forced the British to leave India.

9. He was titled ‘Mahatma’ for his glorious works and achievements.

10. Birth anniversary of Mahatma Gandhi is celebrated as Gandhi Jayanti across India.

1. Mahatma Gandhi was a great leader of the Indian freedom struggle.

2. He went to England to become a barrister. After that, he went to South Africa to practice law.

3. He worked for the unity of the nation and removed untouchability.

4. Gandhiji introduced the idea of Sarvodaya, which means ‘Universal Uplift’ or ‘Progress of All’.

5. Gandhiji wrote his autobiography titled ‘My experiments with Truth’ which covers Gandhi’s life up to 1920.

6. He used the ideals of truth and non-violence as his tools in India’s freedom struggle.

8. During Quit India Movement Mahatma Gandhi gave a ‘do or die’ call to the people of India and forced the British to leave India.

9. People lovingly called him ‘Bapu’ or the ‘Father of the nation’.

10. Unfortunately, he was assassinated by Nathuram Godse on 30 January 1948. 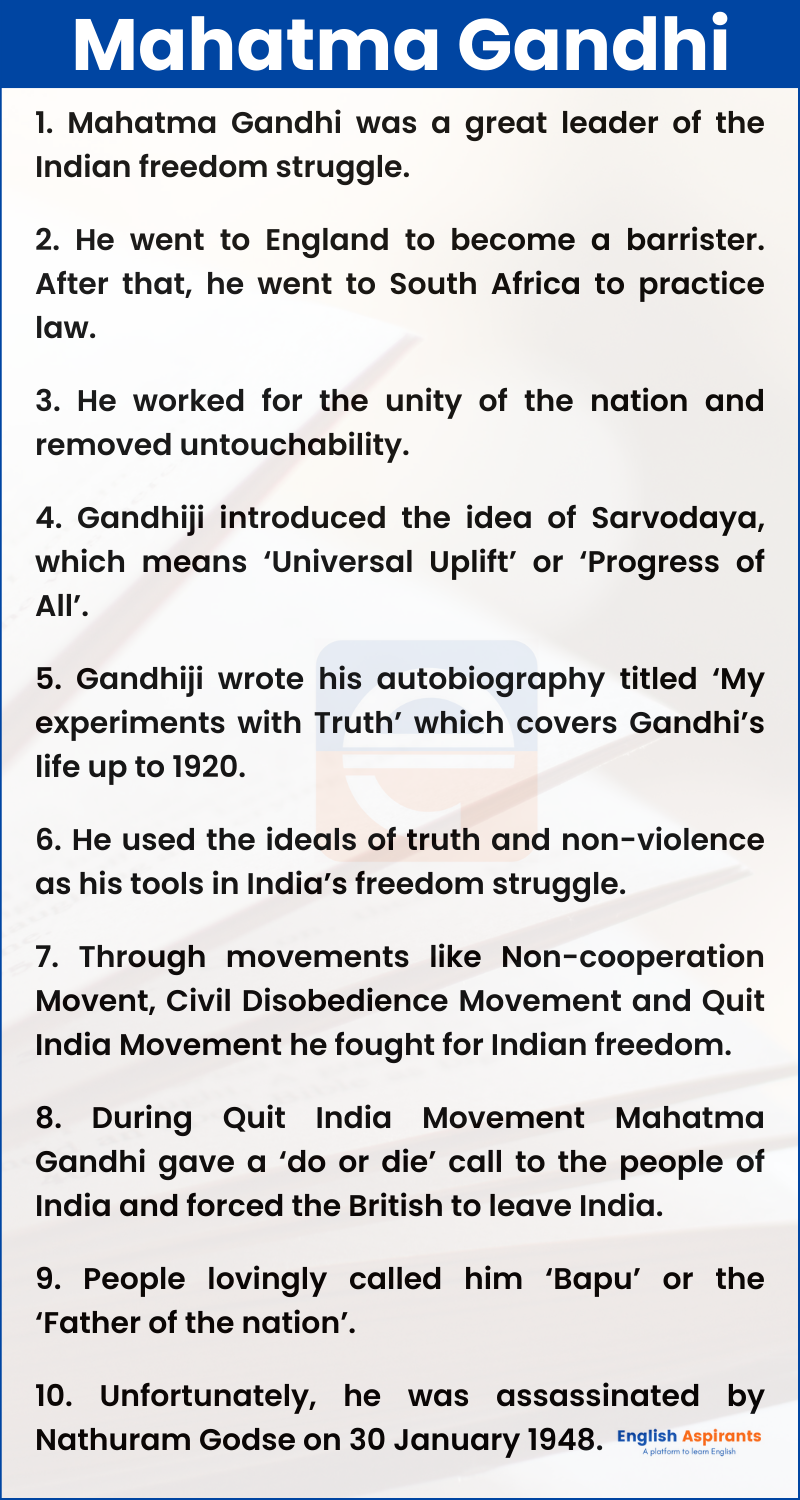 1. Mahatma Gandhi was a political and spiritual leader of India who led the country in the non-cooperation movement, Salt Satyagraha and Quit India movement.

2. Mohandas Karamchand Gandhi was born on 2 October 1869 in Porbandar, a town in Gujarat.

3. He was the youngest child of his parents, Karamchand and Putlibai.

4. After passing matriculation, he went to England for further studies. Then he went to South Africa and started practising law.

5. Gandhiji returned to India in 1915 and became the leader of the Indian freedom struggle.

6. Mahatma Gandhi adopted the principle of Truth and non-violence as weapons against British Rule in India

7. He worked upliftment of Harijans. He founded Harijan Sevak Sangh to eradicate untouchability in India.

8. Greatly was greatly influenced by the writings of Leo Tolstoy, John Ruskin, etc.

9. For his contribution to Indian freedom, we all honor him by calling him the ‘Father of the nation’ or ‘Bapu’.

Q. What are the books written by Mahatma Gandhi?

The famous books of Gandhi are Hind Swaraj, Conquest of Self, My Experiments with Truth (An Autobiography) etc.

Q. What are the famous movements led by Mahatma Gandhi?

Q. Who was Gandhiji’s political Guru?

Q. How did Mahatma Gandhi Die?

Gandhi was shot by the Hindu fanatic Nathuram Godse on 30 January 1948.