1. Rainy season comes after the summer.

2. It is also called the monsoon season.

3. This season begins in June and ends in September.

4. The sky looks cloudy in this season.

6. Children love to play in the rain.

8. Rainbow is seen on the sky.

9. Farmers work hard in their fields in rainy days.

10. Rainy season is my favourite season.

1. Rainy season or monsoon is a pleasant season.

4. People use raincoats and umbrellas.

5. Rainy season is a boon for trees, birds and animals.

6. Beautiful flowers bloom in this time.

7. Rain cleans our environment from pollution.

9. Farmers are happy as it helps in the growth of their crops.

10. The rainy season is very important for us. 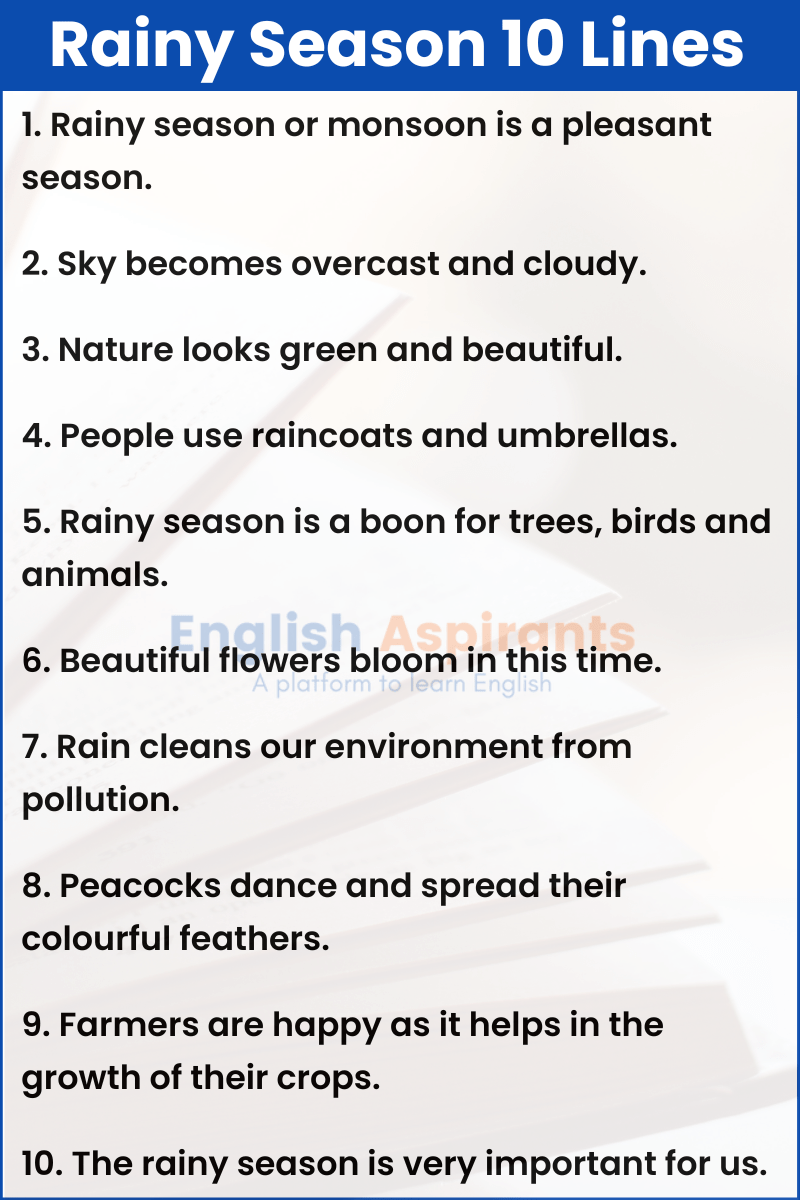 1. Rainy season comes at the end of the hot summer season.

3. The streets and roads become waterlogged.

5. Colourful rainbows are seen in the Sky.

7. A variety of fruits, vegetables, and crops grow in this season.

8. Peacocks spread their feathers and frogs croak to celebrate the rain.

1. After the months of the scorching heat of summer, Rainy season brings relief to people.

2. Kharif crops like rice, sugarcane, pulses, and cotton are grown during the rainy season.

3. Many kinds of vegetables such as cucumber, tomato, beans, brinjal, lady finger grow in this season.

4. In this season we get fruits like apple, cherry, pomegranate, blueberry, etc.

6. Many festivals such as Raksha Bandhan, Rath Yatra, Janmashtami, Ganesh Chaturthi, and 15th August are celebrated during the rainy season.

7. Monsoon is the most important season for farmers as they irrigate their lands during this season.

8. Many waterborne diseases such as malaria, dengue, cholera, diarrhea, typhoid, etc. occur during this season.

9. Heavy rainfall causes floods. So many people lose their lives, houses, and livelihood during floods.

10. Rain has an important function of removing dust and debris from the air and detoxifying it.