A Rainy Day Paragraph: In this article, you are going to learn how to write a paragraph on a rainy day in English. Here you’ll get to read 5 paragraphs on this topic (100, 120, 150, 200, and 250 Words). These paragraphs will be helpful for the students from class 1 to class 2.

All boys and girls like a rainy day. I also like and enjoy the day. Such a nice day came this year in the month of July. It was Monday. The sky was covered with clouds in the morning. It was drizzling. Around 9 o’clock it began raining heavily.

But some of us went to school, completely wet.  It had been raining for three hours. Our Headmaster declared it a rainy day. We started for home after two periods. The roads went under knee-deep water. The cars stopped moving. People were wading through the water. Towards afternoon, the rain totally stopped home wet. I enjoyed the day very much. 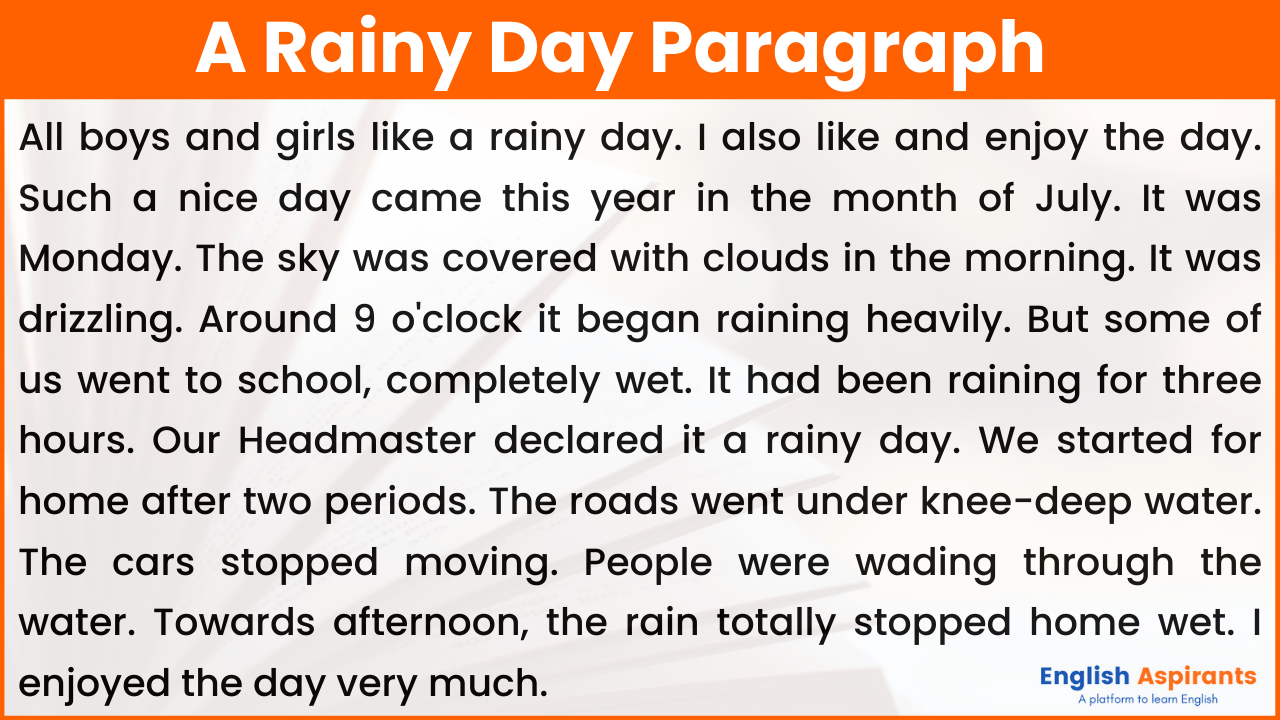 It was a hot, sultry morning of June. The sky was clouded. But there was no rain. There was also no wind. I felt somewhat dull and depressed. Rain then started. Its force increased gradually. The wind also began to blow. I watched the fall of rain through the glass panes of my windows. The city was soon drenched by the downpour.

Paragraph on A Rainy Day: 150 Words

It was the month of July. The sky was overcast with dark clouds from the early morning. But from 7 o’clock it began to rain in showers with thunder and lightning. People took out their umbrellas and raincoats. Soon, the roads and streets were under deep water. The normal life of people got disrupted. Street children began to play in the knee-deep rainwater. Farmers were happy because their crops would grow well.

I could not go to school that day. I enjoyed floating paper boats in the running water. The rain stopped after a few hours. The trees began to shine. I began to watch the sight from the window. And what a mesmerizing sight it was! In the afternoon I enjoyed special dishes with my family. It was really a memorable day for me. I always love such a day which brings enjoyment and freshness to our lives. 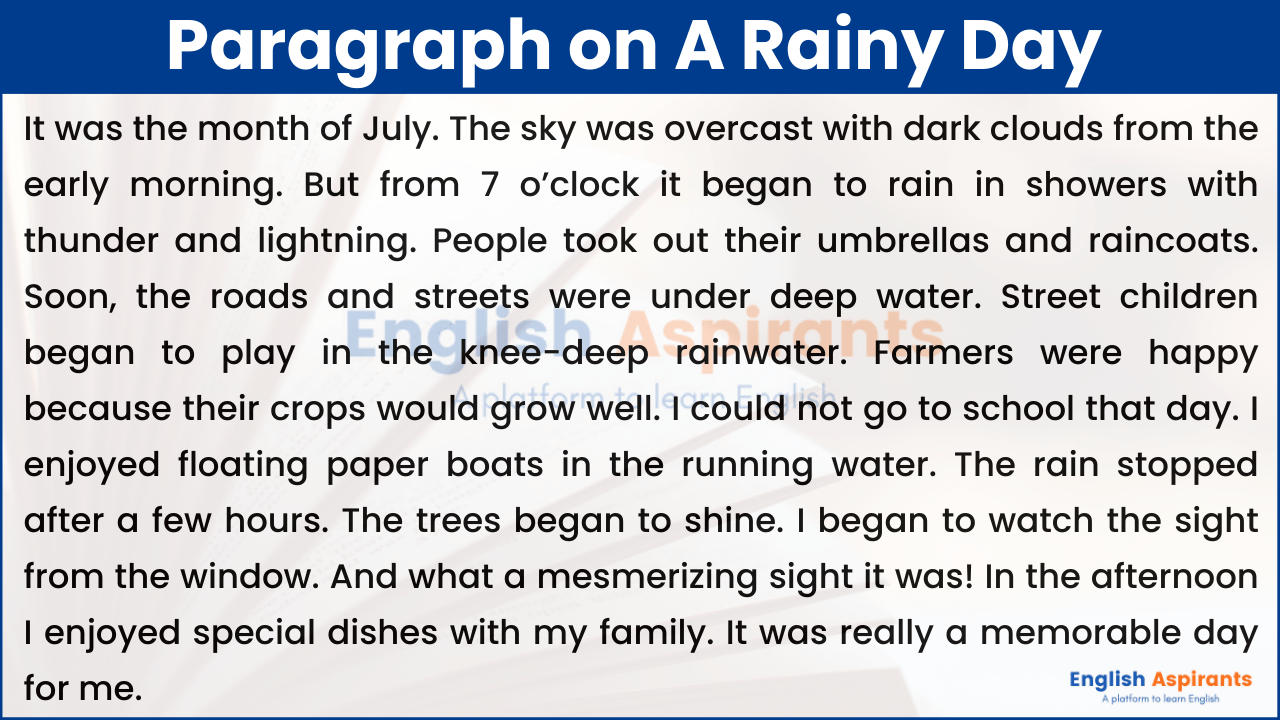 I remember a rainy day. It was in the middle of July. The sky was dull and overcast. It had been raining since the morning. Mother did not let me go to school lest I should get wet and catch cold. After having had my breakfast I sat at the window and saw dark clouds gathering fast in the sky.

It became dark all around and started raining in no time. Men on the street started running for a tree or a shed. Soon it started raining heavily. It poured and poured. It showed no sign of stopping. Soon our streets had become a rushing stream of water. Cars had stopped plying. Only a few rickshaws were seen moving. The lanes and bye-lanes were water-logged.

At long last when the rain stopped, people came out from the shelter. I saw some men soaked to the skin. I thanked God I did not go to school on such a good day.

It was the last day of July. The sky was overcast with heavy black clouds in the morning. There blew a cool breeze all of a sudden. At first, it drizzled. Soon followed by heavy rain. After a hot night, the rain in the morning is a fine thing to enjoy.

People were in a hurry to close the doors and the windows. We came out to bathe in the rain. I felt so refreshed after taking the cool natural shower in the rain. It had been raining since long three hours. Every moment lighting flashed with roars of clouds. Water logged here and there. Roads turned into small streams. There are muddy puddles on the roads. Vehicles stopped plying.  People on the roads took shelter in a shop or under a tree. I could not attend school due to heavy rain.

At last, the clouds floated away. The rain gradually stopped. The blue appeared here and there in the sky. People now came out with shopping bags and folded umbrellas under their arms. Ponds, canals, and tanks looked overflowing. Little children started floating their paper-made boats on the water.

The trees began to shine. Birds chirped merrily in the trees. Frogs started croaking to welcome the rain after the summer heat. Dust and dirt got washed and nature looked refreshing. The flowers looked beautiful. A rainbow was seen bright in the morning sky.

A rainy morning is a grand view. It is refreshing and pleasant. At the breakfast, we enjoyed pakoras with a hot tea. Overall it was a fine experience for me.