Bad Condition of Roads Letter: In this article, you are going to learn how to write a letter to the editor of a newspaper regarding the bad condition of road. We’ve given 5 examples here on this topic. So, let’s begin.

Q. Write a letter to the editor of a newspaper about the bad condition of the roads in your city

To
The Editor
The Hindustan Times

I would like to draw the attention of the concerned authorities through the column of your daily, to the pitiable condition of roads in the city. The condition of roads in the city has become very pathetic. There are big potholes in the middle of the roads. Almost a year has passed but roads are yet to be repaired. The road users, and especially the residents of the city have to face great inconvenience. There are frequent traffic jams. Innumerable accidents have also taken place, some of them are fatal. The City Corporation seems to be helpless in this matter.

I would request the civic authorities to take necessary measures to get the road repaired as early as possible. 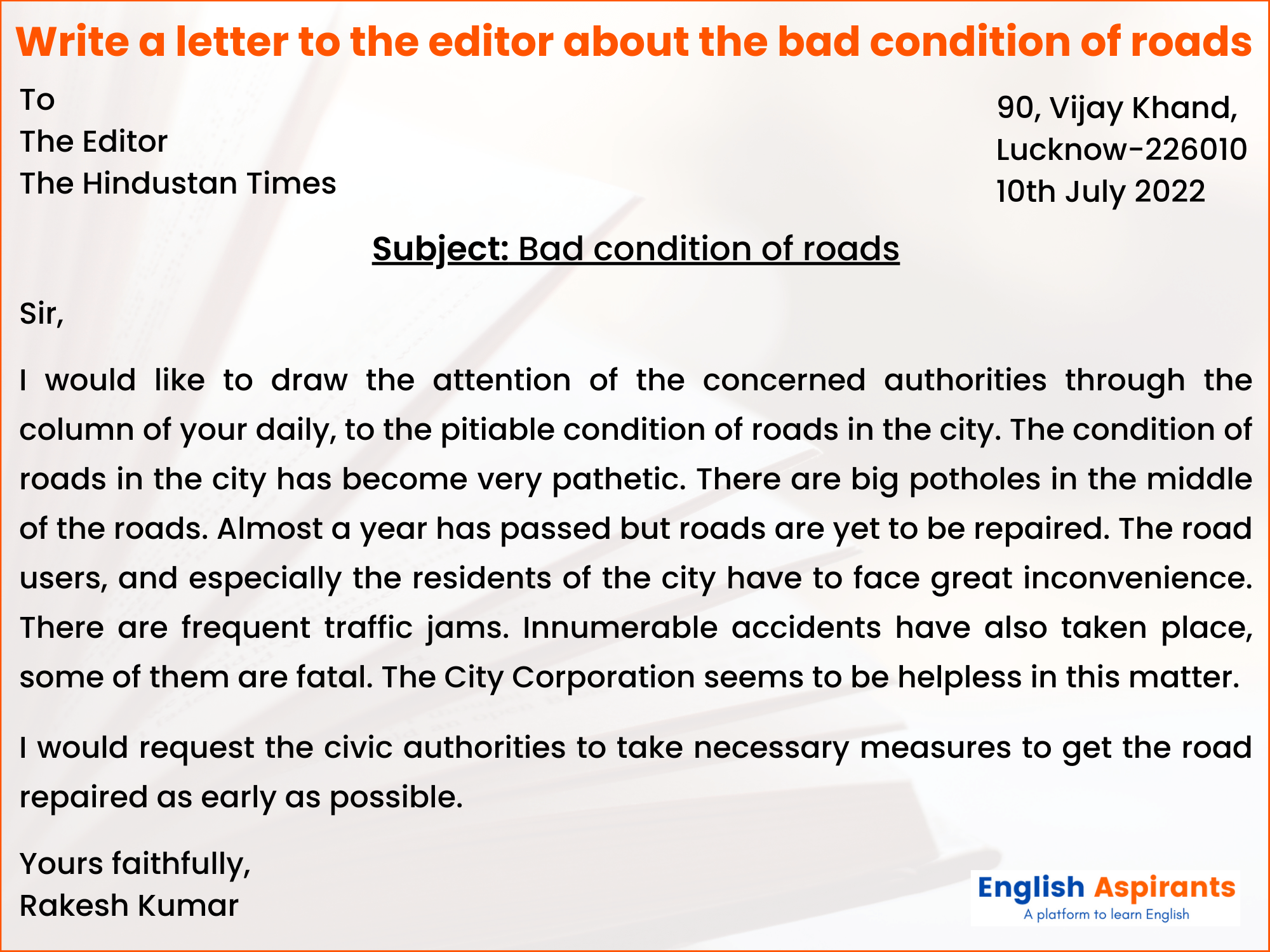 Q. Write a letter to the editor of a newspaper complaining about the bad condition of roads

To
The Editor
The Statesman
Kolkata-700001

Subject: Complaint about the bad condition of roads

I will be highly obliged if you kindly publish this letter about my views on the bad condition of roads in Kolkata in your esteemed daily. Bad condition of the roads causes a lot of inconvenience to the people, resulting in traffic jams during the peak hours and frequent accidents. Many roads are under construction due to which other roads are getting crowded. The number of vehicles are increasing by leaps and bounds. Two wheelers sometimes get the pavement, on this makes it difficult for the pedestrians. During and after the monsoon condition of roads become even worse.

I hope that, Keeping the above in view the Government will initiate the necessary steps to address the problem. 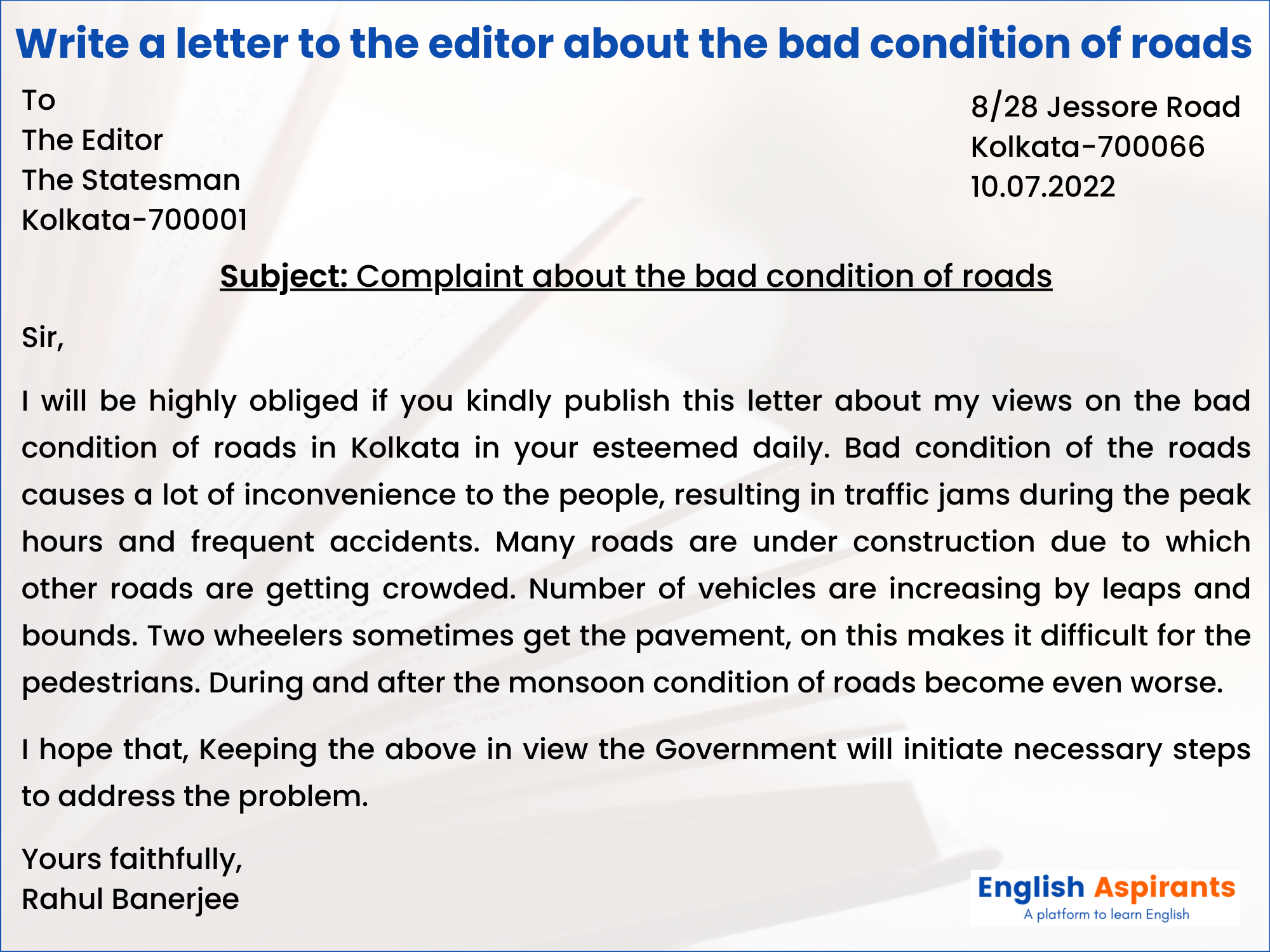 Also Read: Letter to the Editor of a Newspaper on Reckless Driving

Q. Write a letter to the editor of a newspaper about the bad condition of roads in your locality

To
The Editor
The Telegraph
Kolkata-700001

Sir,
We, the residents of Karawal Nagar, North East Delhi, shudder to think of the miseries awaiting us in the coming weeks.

The roads in our locality are in a horrible condition even in dry season. They are full of ruts and potholes. In some places they are so narrow that even two cyclists can hardly pass side by side. The roads being non-metallic, they look like pools of water after a shower. Hardly any repair works are taken up in the roads. In fact, they have become dangerous. Just think of the unfortunate boys and girls who have to walk some 3 kilometers to attend schools.

Sheer disgust and despair have compelled me to write this letter on behalf of the people in this area. I hope that the authority will look into the matter and arrange to keep the roads in good condition.

Q. Write a letter to the editor of a newspaper regarding the poor condition of roads

To
The Editor
The Times of India

Through the column of your esteemed newspaper, I would like to draw the kind attention of concerned authorities towards the poor condition of roads in Shivaji Nagar.

The roads have become almost impassable. Most of the roads are in a state of disrepair. There are countless potholes in the middle of the roads. During the rainy season, these potholes turn into small pools of dirty water, making it tough for vehicles to drive. Due to water logging, the potholes become invisible. This makes the area heavily accident-prone. As a result, students cannot reach school in time, traders cannot take their commodities to market, servicemen cannot reach office on time and all others too face difficulty for bad roads.

So, Sir, I earnestly request you to publish it in your newspaper so that the concerned authorities may take proper action regarding this matter as soon as possible.

Also Read: Write a Letter to Municipal Corporation About Garbage in Your Area

Q. Write a letter to the editor of a newspaper complaining about the bad condition of roads

To
The Editor
The Statesman
Bangalore

Subject: Complaint about the bad condition of roads

There are many roads in our village. These roads are in a poor condition. It is difficult for the vehicles to pass the way. Frequent accidents have also taken place. They have not been swept for the past two months. There are many potholes on these roads and there is no proper drainage facility too. This has led to the stagnation of water, decay and spread of foul smell. Flies and mosquitoes have been spreading disease.

On behalf of the people of my village, I request you to draw the attention of the concerned authorities to get the drains cleaned and the roads swept daily without fail.