Holi is one of the most popular festivals in India. It is a festival of colours, joy, and friendship. It is celebrated in the month of March. It is generally celebrated to mark the victory of good over evil. People celebrate the festival by smearing each other with colours. People play with water guns, pichkaris, and water balloons to make Holi more colorful.

People forget their enmities and celebrate the festival of colours. People wear white clothes and visit each other’s houses. Sweets and delicious dishes are prepared on the day of Holi. People distribute gifts to their loved ones. Holi is the symbol of unity, harmony, and brotherhood. 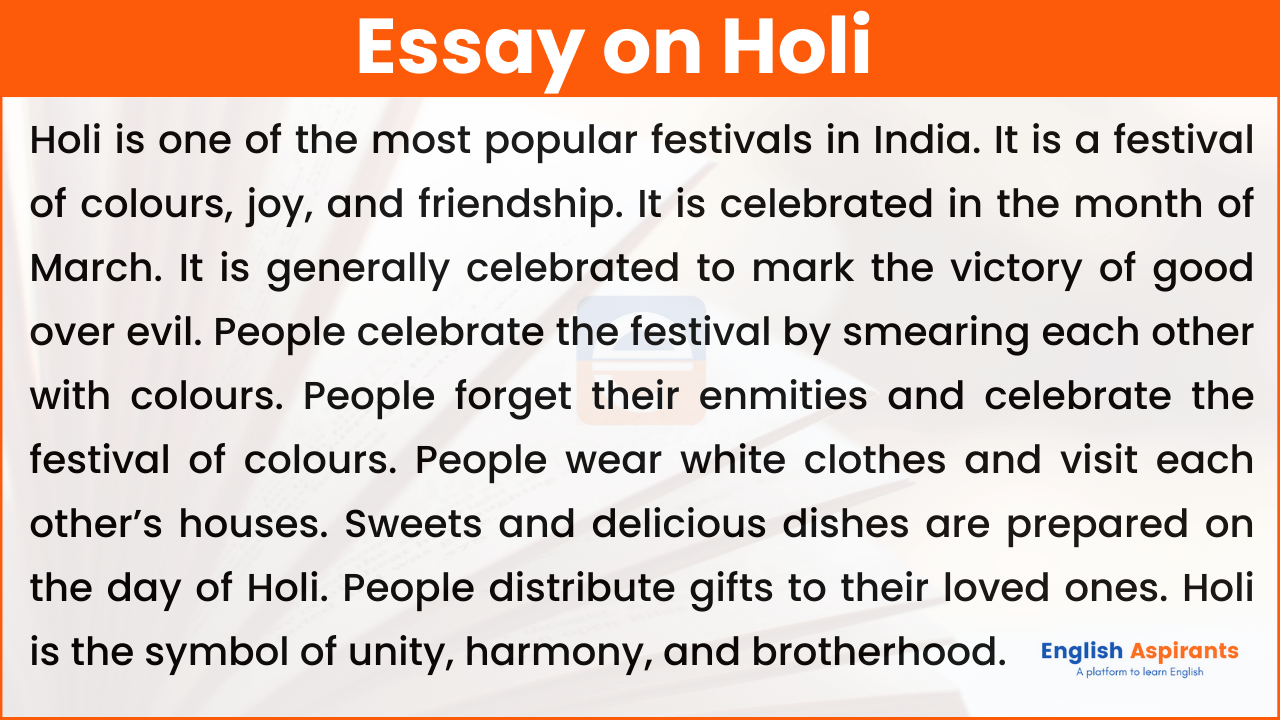 Holi is an important festival of the Hindus. It is a festival of colours. The festival of Holi is celebrated in the spring season for two days. The celebration begins with Holika Dahan on the night before the festival and the following day is called Holi.

On the occasion of Holi people are very happy. They forget their cares and anxieties. They make delicious food. They put on new dresses. They sprinkle coloured water on one another. They smear coloured powder on the faces of others. They sing, dance, and jump about. They bens drums and sing Holi songs. They are almost mad with joy. They forget what they are. In the evening they visit their friends, relatives and neighbours. They embrace one another. They smear abir on the faces of others.

Holi is a happy occasion when we mix freely with all. We forget the social distinction between the rich and the poor. This colour of festival unites people and removes all sorts of negativity from life. 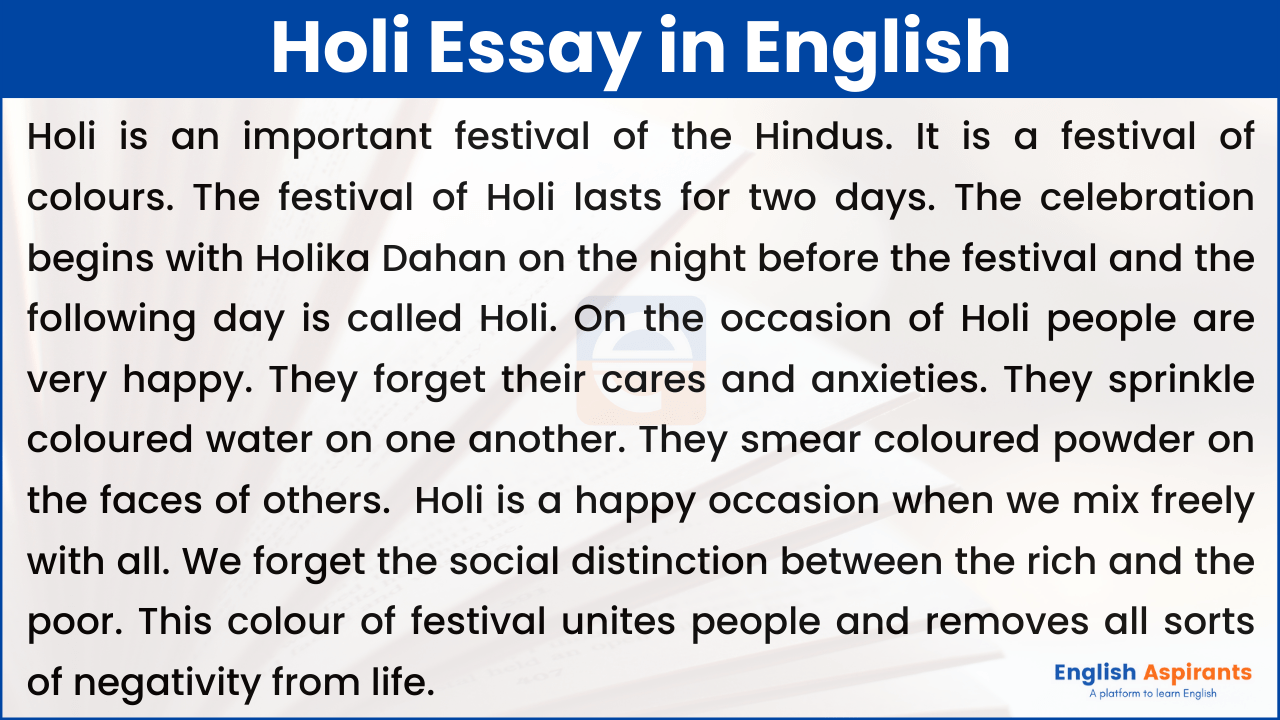 Holi is one of the most well-known festivals in India. It is celebrated in the month of March. It celebrates the arrival of spring and marks the victory of good over bad.

People celebrate Holi by splashing water and smearing each other with colours. People dress up in white clothes and visit family and friends to throw colors on each other. Children enjoy the day by playing with water guns and water balloons. People exchange sweets and gifts on this precious occasion.

This festival has a cultural and religious significance. In ancient times there was an evil king named Hiranyakashipu. He did not believe in God.  His son Prahlad was a devotee of God. The evil king ordered his sister Holika to sit on a pyre with Prahlad in her arms. Holika got burnt but nothing happened to Prahlad. In memory of this incident, Holika Dahan is done on the night before Holi. Religious rituals take place on the night before Holi to symbolize the destruction of evil.

Holi is the festival of love, harmony, friendship, and brotherhood. The colourful festival of Holi is the symbol of unity which inspires us to forget enmity and move on the path of goodness. 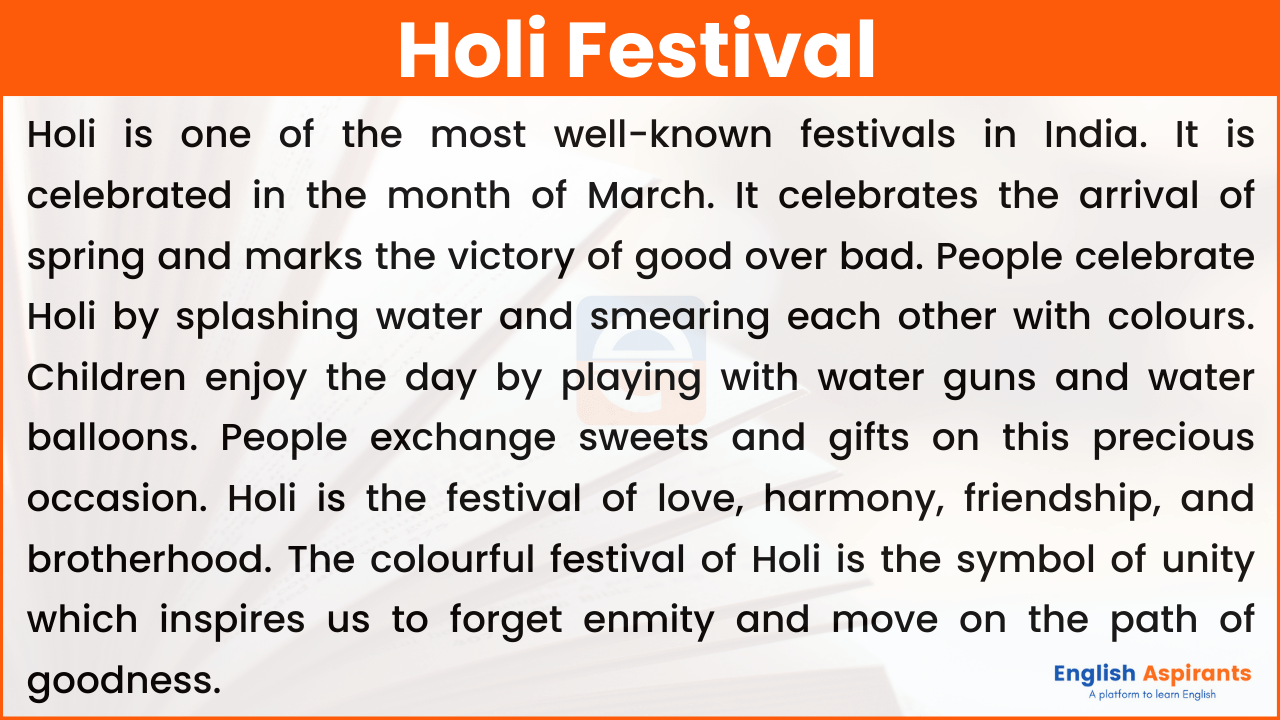 Essay on Holi in English: 500 Words

India is a land of fairs and festivals. Hardly a month passes without some fair or festival. Holi is a festival of colours. It is a festival of fun and frivolity. It is an occasion for gaiety and mirth. Men, womanhood children are all in high spirits. In different states of India, it is celebrated in different ways.

How it is celebrated

Throwing of water and colours comes to an end in the afternoon. People wash themselves clean and put on clean clothes. Delicious dishes are prepared and feasts are held. An intoxication is prepared from ‘Bhang’. It is believed to be the favourite drink of Lord Shiva. People eat, drink dance and make merry. Fools’ clubs hold their meetings and pass foolish resolutions. The greats fool is elected as the president of the club.

Holi is celebrated in Mathura and Brindaban in a traditional style. ‘Ras-Leelas’ are performed and memories of Lord Krishna and his Gopis revived on a thousand ways. There, it has a religious touch and people come from far and wide to participate in the Holi festival.

The legend of Holi

Many myths and legends are connected with Holi. It is said that Prahlad was put to by his father Hirnakshap, Because led had a firm faith in God. Inspite of great tortures, Prahlad did not give up in faith in God. Then Hirnakshap asked his sister Holika to sit in a burning pyre with Prahlad in her arms. Holika was burnt to ashes but Prahlad remained untouched by the flames. Thus Holi commemorates the devotion of Prahlad and the cruelty of his father Hirnakshap. A bonfire is lighted every year and Holika is burnt for her villainy. According to another legend, Lord Krishna killed a giantess named Pootna on this day. Holi has yet another significance.

Whatever may be the significance of Holi, it is certainly a colourful festival. It fills our life with fine colours of fun and joy, mirth and laughter. People forget all old enmities and celebrate this festival of colours.