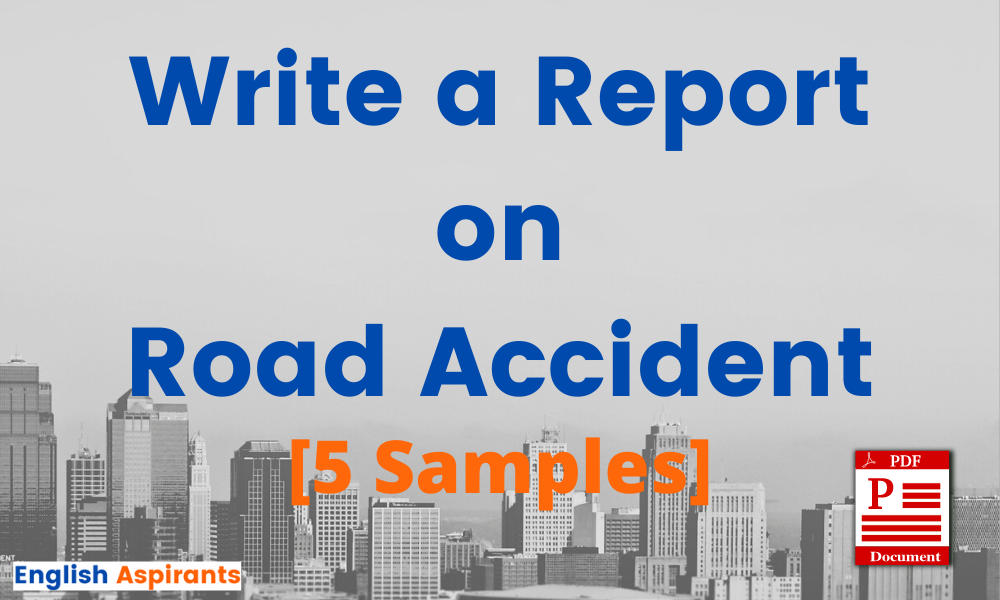 Write a Report on Road Accident: In this article, you are going to learn how to write a newspaper report on a road accident in English. We’ve included 5 samples for your convenience. All the reports have been written in a lucid manner and are easily understandable for the students of all the classes. We’ve also added a Free PDF at the end of this article.

A Horrible Road Accident in Andheri
By Rahul Tripathi

Andheri, August 21: Two persons died and two more were injured when a speeding lorry had a head on collision with a car yesterday at around 5 p.m. near Andheri.

It was office time and the crossing of Andheri was crowded as usual. Mr. Sharma, an eyewitness of the accident, reported that while overtaking a bus, the speeding lorry hit a private car which was coming from the opposite direction. The driver and of the man sitting next to him died on the spot.

Two persons sitting at the back seat got severely injured. The locals rushed to the spot and took the injured to the nearby hospital. The accident brought the traffic to a standstill. The investigation has been demanded as how a lorry was allowed to ply at that hour of the day. The administration has promised to look into the matter. 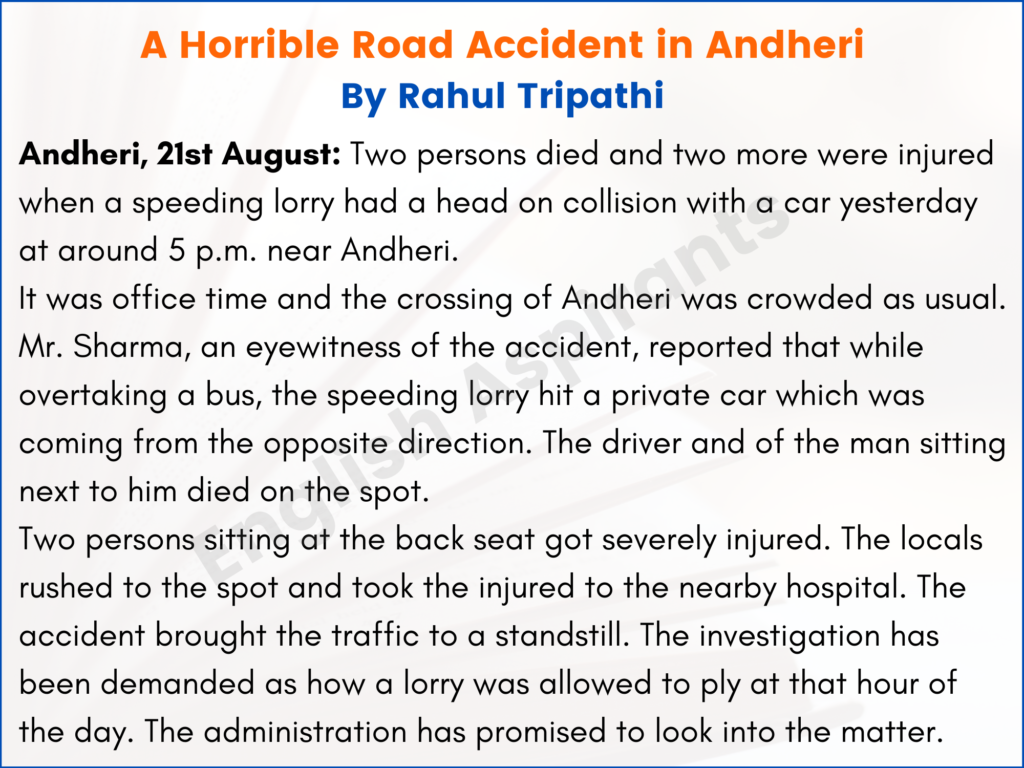 Four Persons Injured In a Road Accident
By Anand Mishra

New Delhi, Oct. 29: Four persons were injured in a road accident at 10 o’clock yesternight. The accident occurred near Subhash Nagar. A loaded lorry, with eight members, was rushing, at a high speed, from south to north.

Somehow the driver lost the control over the brake. The lorry turned on the wrong side and dashed against the road fencing and smashed it. The lorry even struck against two standing motor cars. The cars were damaged. Four persons were injured, two of the lorry workers and the drivers of the standing cars.

The local people rescued the injured and send them to the hospital. The condition of the two was serious. Agitated people blocked the road to express their resentment. The police arrived soon and restored the normal traffic.

Kolkata, April 29: Twelve persons including a woman died on the spot and thirty others were injured when a bus overturned in a field at Mohanpur some 12 km from Bolpur this morning. The ill-fated bus ‘Gati’ was heading towards Asansol from Katwa carrying about 85 passengers when suddenly it lost control.

The condition of 10 injured passengers is reported to be serious. People from neighboring villages rushed to the spot and extended their hands in the rescue operation. Soon a large crowd gathered and tens1on rose high.

However, police arrived and took control of the situation. The injured passengers were admitted to Bolpur Sub-divisional Hospital at Sian.

Krishnanagar, 2nd April: A fatal accident took place due to a collision between a tourist bus and a loaded truck at 9.30 p.m. last night on the National Highway near Krishnanagar. There were 35 passengers on the bus. Out of which 20 were men and 15 were women.

15 people died on the spot. 12 people were seriously injured. The driver of the truck tried to escape but he was caught by the local people and handed over to the police.

The injured persons were taken to the hospital immediately. Police managed to rescue the bodies from the mangled bus. The bodies were sent to the Krishnanagar Government Hospital for postmortem. 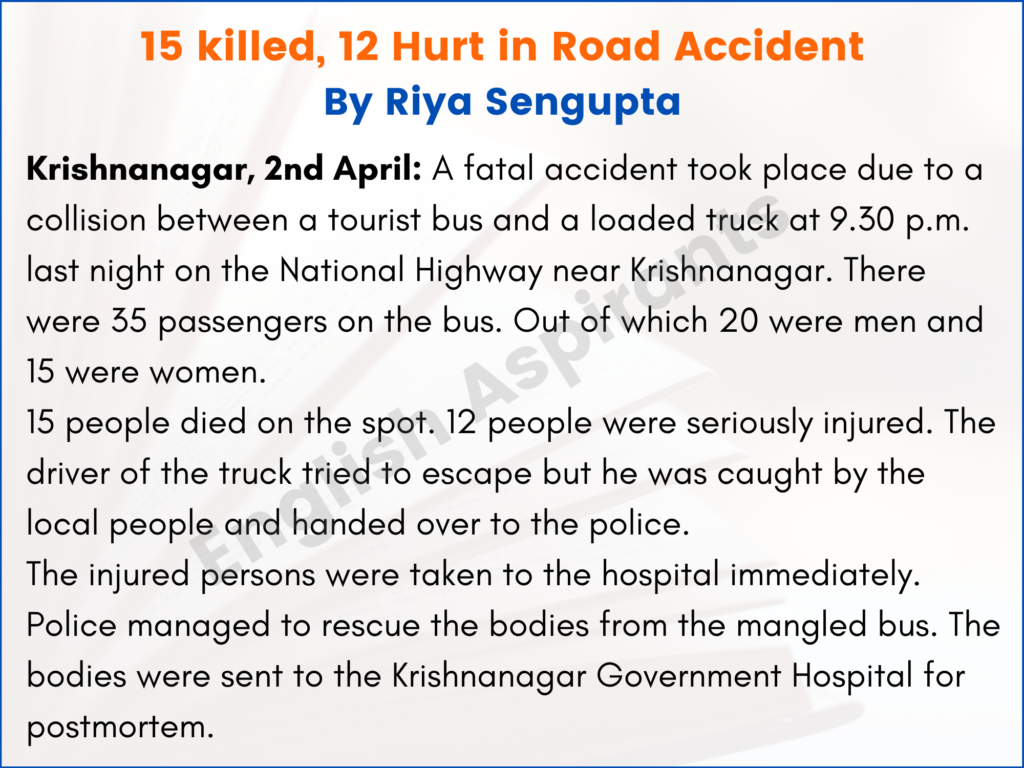 12 Killed in a Horrible Bus Accident
By Javed Kazi

Dehradun, 25th April: At least 12 persons were killed and 20 people injured seriously when a private bus skidded off the road and fell into a deep gorge in Chakrata in Dehradun district on Sunday. The accident took place at 11.30 a.m in the morning.

The bus was on its way to Vikas Nagar when the driver lost control of the bus on Baila Pingua Road. This is the 3rd severe road accident in this area. The government has announced relief to the survivors and reparations to the families of the deceased.

According to the survivors, the bus driver was speaking on his cell phone while driving and even refused to heed repeated pleas by passengers not to do so. The police are still investigating the matter. The ambulances were called immediately and injured persons were taken to the hospital or treatment.