Television is based on a highly sophisticated science of vision and sound. A man can see as far the horizon. He hears as far as the sound is audible to him. But television takes his vision to a place far beyond his horizon. He sees a thing or person long beyond his actual physical reach. It brings to him also sound from a very remote place.

In fact, television brings vision and sound together from a distance which is beyond the range of human sight and hearing. It is a powerful and very useful invention of modern science. It has conquered space for human eye-sight. It has brought about a great development in the science of communication. It can well be used for entertainment and knowledge. 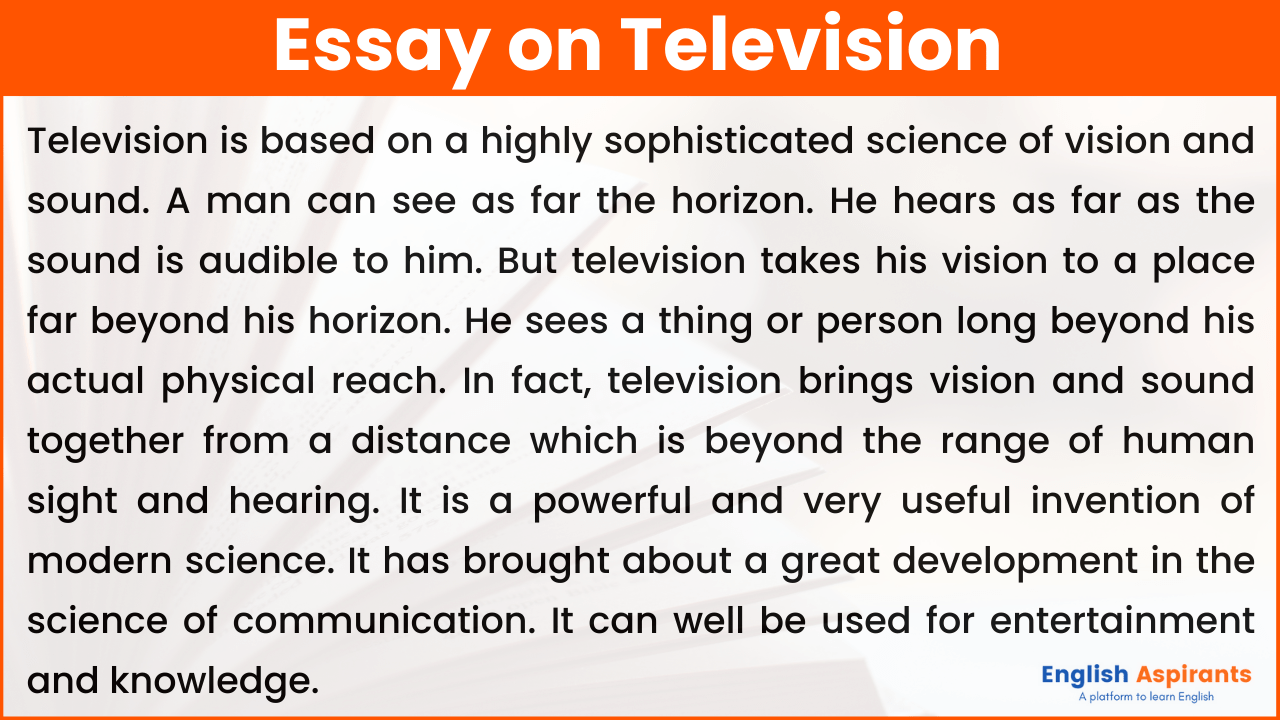 One of the latest wonders of science is Television. It is an effective medium of communication and entertainment. We can watch live important political, sports and other events happening at distant places. This enables us to have a direct knowledge of the things, places and events far away. TV has thus brought the whole world into the drawing room.

Television is also a powerful medium of mass education. Educational programmes on healthcare and family planning, general knowledge can be sent to millions of viewers through audio-visual presentation in the TV. It also keeps off loneliness.

But TV has its bad effects too. Watching TV sometimes becomes an addiction, People remain glued to the TV and it makes them idle- particularly the students and young people. They neglect sports and games and their studies. Too much of viewing affects our vision. Programmes, if not properly selected, cast bad effects on young minds. Social visits become very rare and people become unsocial. 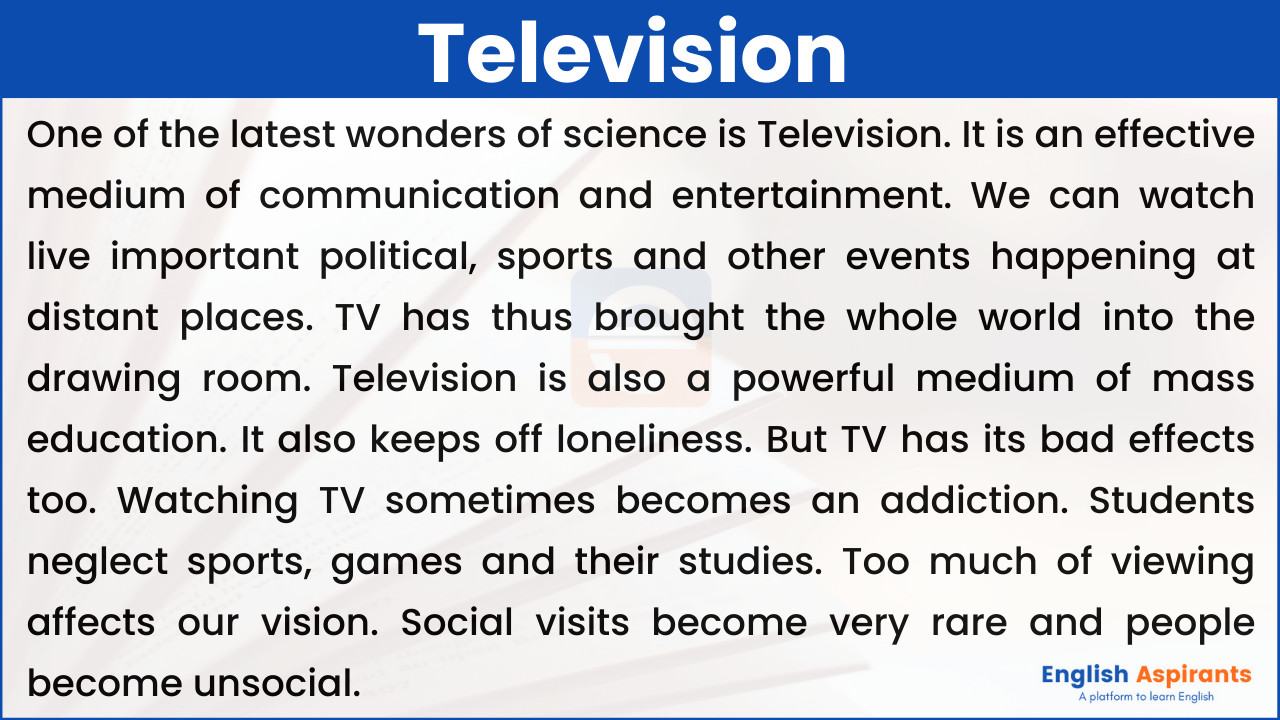 Essay on the Television: 200 Words

No other thing is as familiar as Television in our present times. It was invented by John Baird in 1925. It first appeared in India in 1959. It is really a wonder of science today. It is a two-in-one. It is the radio on one side and the cinema on the other. Television is a very useful instrument in many ways. It is a powerful medium for education and recreation. It gives lessons on the subjects like science and mathematics and also on geography and history.

It shows us cinema and live telecast on games and sports. On its screen we have a delightful scenery of nature and thrilling sights of animals roaming in the jungles and in the deep waters of the seas. We can amuse the shows of serials. It is also a mighty medium of advertisement.

Sometimes it has bad effects on children. In most cases, they sit tight with it to witness their favorite items which captivate them greatly. Sometimes they neglect their bounden duties as students. They try to copy the most interesting show-style. In some cases they even face their death. Many things are very good with television but its price is very high and the poor cannot benefit by it.

Television is a modern invention. When television was first invented, people of the world were very happy because they had the scope to know the world around them and to entertain themselves in the best possible ways. Television is no doubt something which ushered progress of civilization. Some electronic media like BBC took over the most important role to make the people of the world aware of the society to which they were belonging and the environment by which they were being nourished. It is quite well known that, BBC produced all of the plays of Shakespeare as films. Even this world famous electronic media focused on the two World Wars so much so that people of the world came to know how horrible was war and warfare. Thus social consciousness was an important factor that was first aroused by the aid of television.

But this television is now being abused constantly by some commercially debased people. In West Bengal, television is so abused that the young generation is now misguided. The young people follow the bad culture and become oblivious of the hoary tradition of our country. Mere entertainment has been presented on the different television channels. Meaningless serials and reality shows are heart-throbbing without any moral impact. Crimes and social disorder are presented so crudely that the minds of the young people are overwhelmed with frustration, dilapidation, and despair. It seems that there is no escape from despair. The ultimate result is social alienation which brings about moral dilemma.

Yet, the concerned authority is really callous to the problems. Advertisement, sponsors, etc. are the sources of the economic structure of the different channels. Thus, the producers intend to draw the attention of the businessman by claiming the popularity of the channels. The inevitable result of this kind of commercial debasement is of Course disintegration that causes serious disbelief in the sphere of culture and education. Therefore, we must be conscious of the fact that television is not merely a media for entertainment; rather it is a source of important social and cultural messages.