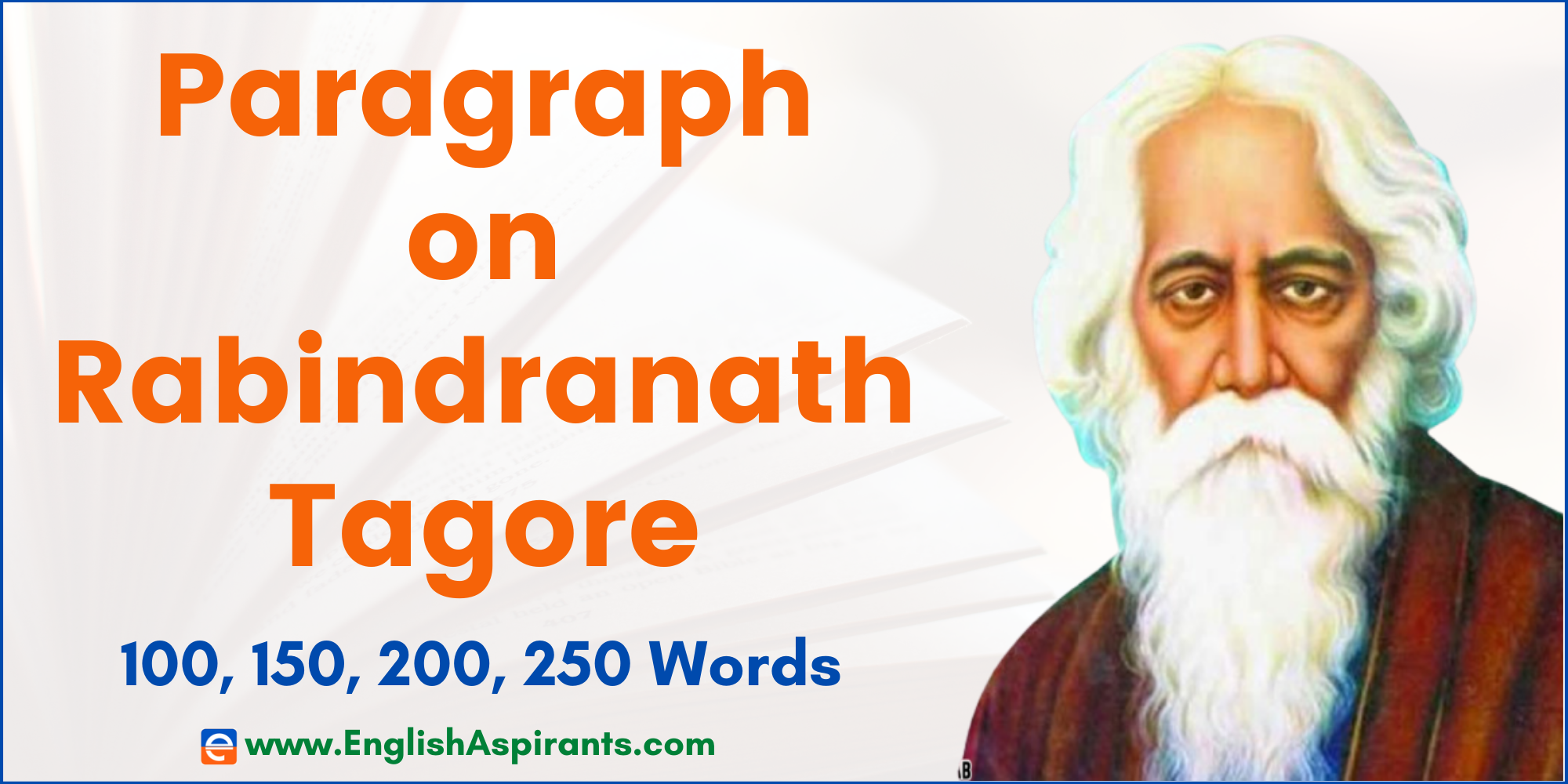 He was also a great composer. He composed the national anthem of our county, Jana Gana Mana. His Important works are Gitanjali, Ghare Baire, Rabindra Sangeet, Amar Sonar Bangla, etc. He was the first Indian to win the noble prize in 1913 for ‘Gitanjali’. He died on 7th august 1941. Rabindranath tagore will remain in our hearts forever. 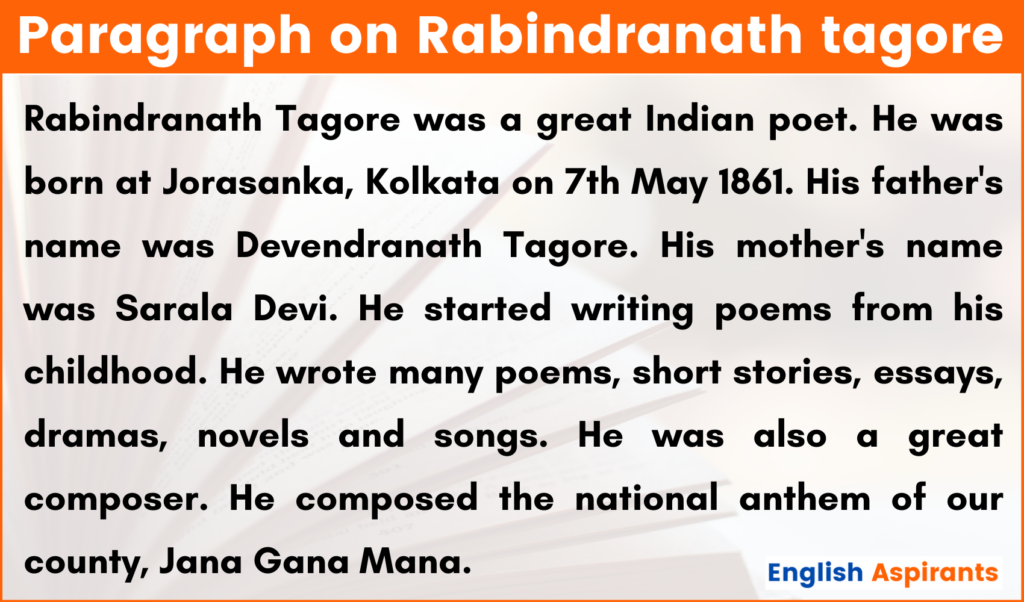 Rabindranath Tagore, one of the greatest sons of India, was born in a very rich, cultured and zamindar family at Jorasanko, Calcutta, in 1861. His father’s name was Maharshi Devendranath Tagore. He went to England several times in his early childhood.

Tagore showed great promise as a writer and composer from his early childhood. His first opera Bhanu Singher Padabali created a sensation. He was married to Mrinalini Devi. Rabindranath wrote a large number of dramas, novels, short stories, poems, etc. His most brilliant work was Geetanjali for which he was awarded the Nobel Prize for literature in 1913.

However, his greatest creation was Santiniketan. Rabindranath was not only a great writer and composer but also a strong supporter of the nationalist movement. He also worked for international brotherhood and advocated equality among mankind. He died at the age of 80 in 1941. 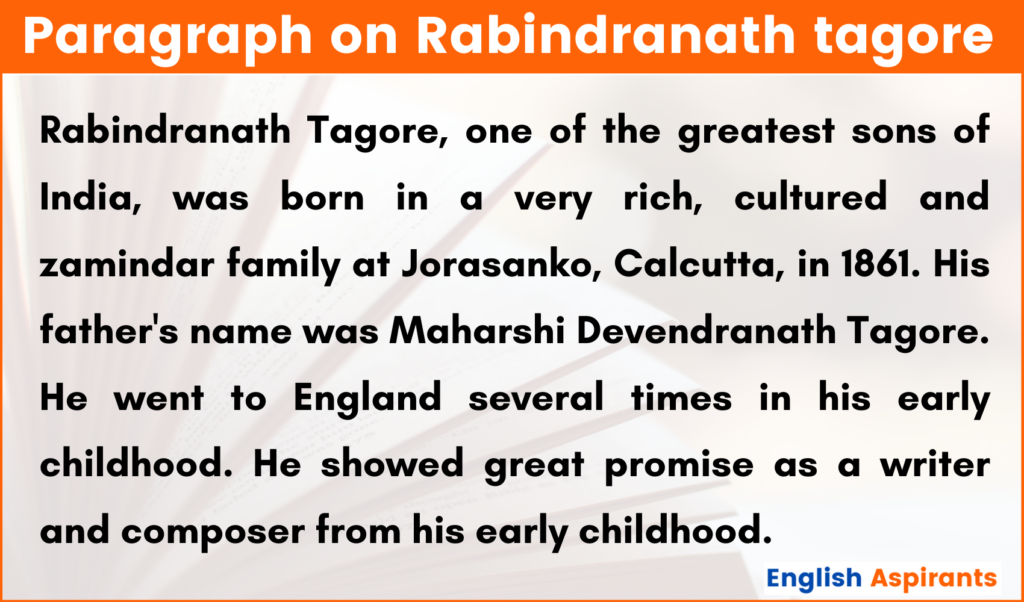 Rabindranath had no formal University education. But he went to England at the age of 17. He joined the University of London but he returned home soon after. His poetic career started quite early. His first collection of lyrics ‘Manashi’ was published in 1890. That was followed by two more collections of lyrics-‘Chitra’ and ‘sonar Tari’.

‘Gitanjali’ was published in 1909. That won for him the Nobel Prize of Literature in 1913. Rabindranath was a versatile literary master. He was a novelist and dramatist of repute. Rabindranath wrote innumerable poems, Dramas, essays, plays, short stories, novels etc. He was a sincere educator and social reformer.

He founded Viswa-Bharati University at Santiniketan, Bolepur in 1901. As a man Rabindranath was outstanding. He was a great patriot and peace-lover. Rabindranath wrote our national anthem, Jana Gana Mana. He ever stood against social wrongs. The great poet passed away on August 7, 1941. 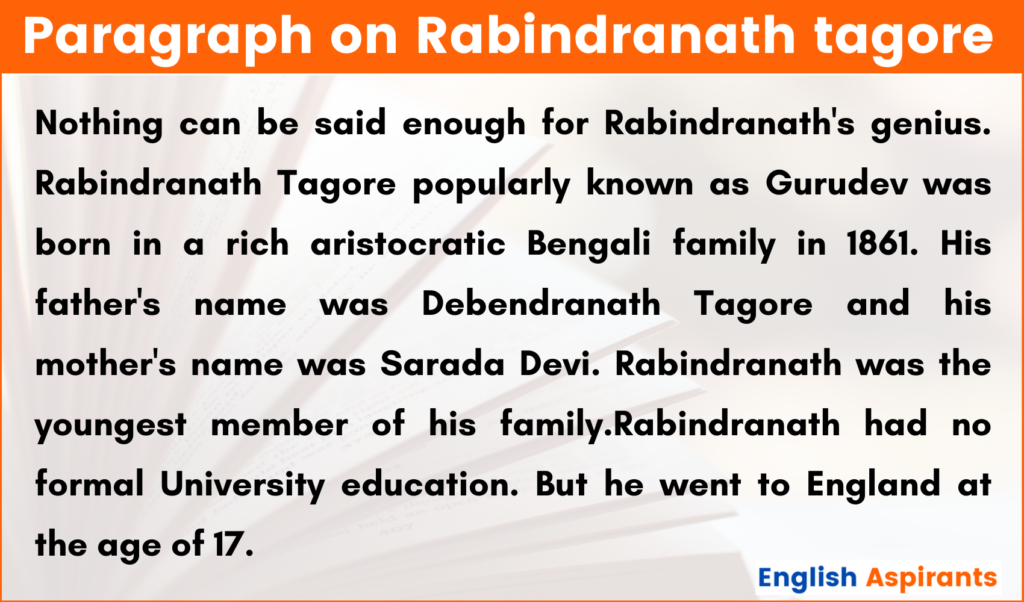 Rabindranath Tagore was a great Indian poet. He was lovingly called Gurudev or Kabi Guru. He was born at Jorasanka, Kolkata on 7th May 1861. His father was Devendranath Tagore and his mother was Sarala Devi. He was born in a rich Brahmin family in Kolkata. He was the youngest sibling in his family.

Rabindranath was educated at home. At the age of seventeen, he was sent to England to become a barrister to fulfill his father’s wish. He was interested in writing poems from his childhood. His first poem was published when he was only eight. He started publishing his poems under the pseudonym Bhanusingha.

He was the first Indian to win the noble prize in literature in 1913 for ‘Gitanjali’. He was married to Mrinalini Devi.  Rabindranath Tagore found Visva Bharati University at Shantiniketan, Birbhum. Tagore was also a great patriot, he participated in the Indian nationalist movement.

Tagore was awarded Knighthood by the ruling British Government in 1915. But he renounced his Knighthood as a protest against the Jallianwala Bagh massacre in 1919. This eminent person died at the age of 80 on 7th august 1941. He will remain in our loving memory forever.

Q. Where was Rabindranath Tagore born?

Rabindranath was born on May 7, 1861 in a wealthy Brahmin family in Calcutta.

He won the Nobel Prize for his collection of poems, Gitanjali, in 1913

Q. Why did Rabindranath give up his Knighthood?

Rabindranath Tagore gave up his knighthood as a protest against the Jallianwala Bagh massacre in 1919.

Q. What are the famous books of Rabindranath Tagore?