The mobile phone is one of the greatest gifts of modern science. It is also called cell phone or smart phone.  It is a great medium of communication. In earlier times mobile phones were used only for communication. But now-a-days a mobile phone is used as an entertainment device. We can use it for watching videos, listening to music, capturing pictures, web browsing, calculating, navigating and many more purposes.

The mobile phone has many advantages but we should use it in moderation. Excessive use of mobile phones can affect our physical and mental health. Students often misuse it and their study is affected badly. We should use our mobile phones very wisely. 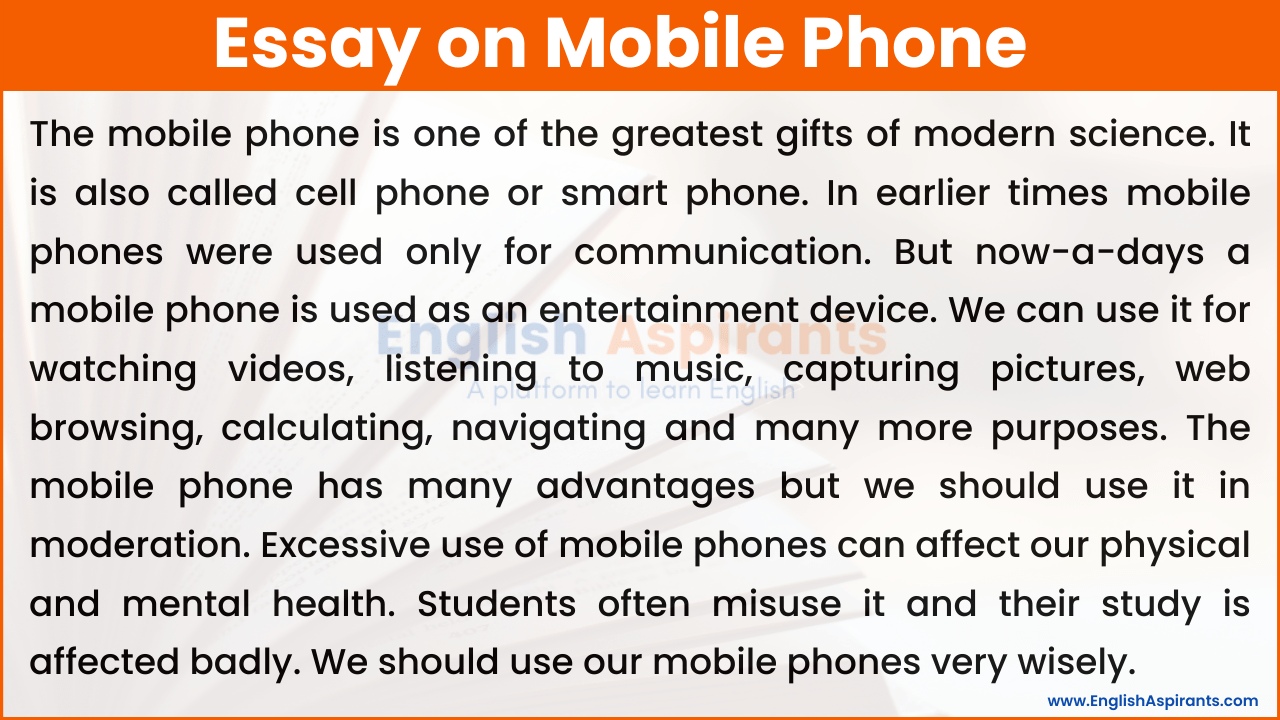 The mobile phone is a miracle of science. From a minor student to an ordinary Worker, everyone possesses a cell phone. Indeed, this is a very popular item today. It is truly, a mark of modern living, a part of the modern life-style. Of course, its usefulness is undeniable. Now a man can have communication anywhere, anytime to anyone sitting thousands of kilometers from him.

Today it is not only a communication device. It can be used for a number of purposes like online ticket booking, navigation, playing video games, taking pictures, recording videos, web browsing, video calling etc. In fact, now we use mobile phone for taking online classes. Hence it is called a Smart Phone. At the same time, the excessive craze for this is not desirable and may even prove dangerous. Mobile phone is to be taken as an utility service, and not as a show-piece. 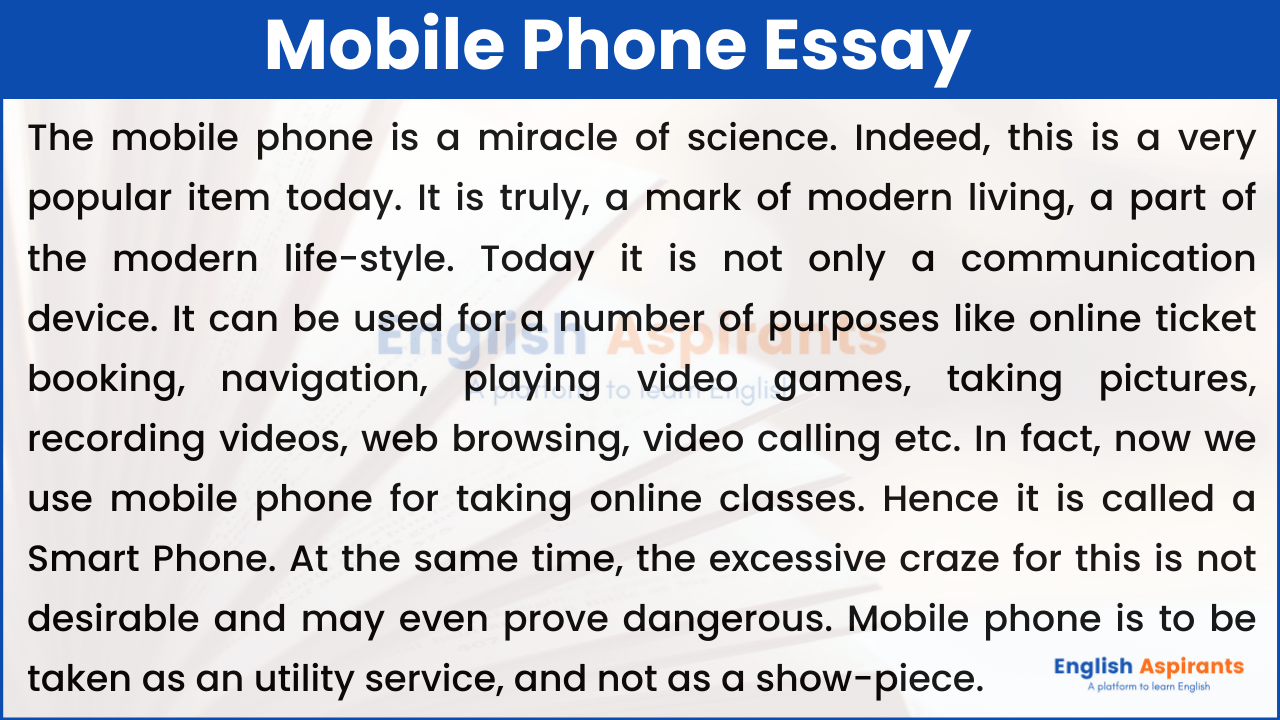 A mobile phone or cell phone is a hand-held portable radiophone that uses the cellular or satellite network for voice or data communication. Unlike landline phones, which are fixed, mobile phones can be easily carried, and one can contact a person anywhere whether at home, on the bus, in street, or in a meeting. Apart from talking, it can be used for sending SMS, e-mail and for taking photos and videos.

High-end mobiles act as mini computers, offering services like internet, diary, music, iPod, calculator, alarm clock, etc. It is extremely useful in emergencies. But there is a tendency to abuse it. To many, it is an Addiction rather than a necessity. A cell phone ringing in an auditorium is most annoying. Using a mobile phone while driving a car or a motorbike and crossing a road or a railway track had led to many accidents.

Teleshopping is a great nuisance. Privacy is often violated, as most mobile users are unaware that they could be photographed or tracked. Terrorists use this gadget to trigger bombs and achieve their ends. Mobiles can also cause health hazards. The radiations from mobiles may cause injury to the brain. Cellphones on vibration mode put in front pocket may damage the heartbeat system. With all its advantages, what is, therefore, needed is moderation in the use of mobile phones.

When telephone was first introduced in the world in the 1950s, people were keenly interested in it. As an easier way of communication, telephone has its own merit. Of late, the introduction of mobiles makes an easy access to communication. It is in fact inevitable in the present day of hurry and business. People have warmly accepted mobiles as the blessing of science. There is little doubt that without the use of mobiles none is nowadays able to lead one’s life quite normally. One is capable of communicating with people, staying far away very quickly. Thus many a problem can be well- solved by way of using these mobiles.

But everything has its merit and demerit. As science is a bane as well as a boon, mobiles are to some extent to be cursed. People, especially the young generation, have been abusing mobiles. They not only chat in an unexpected way but also indulge themselves in leading immoral life by abusing mobiles. Apart from this, several mercenary companies exploit the advantage of mobiles to meet their selfish ends. They do business through mobiles. As a result, young people have been misguided. To use mobiles is for them to be up to date. They avail themselves of the opportunity of the internet connection in their mobiles and do whatever they like to do. Obscene video clippings and some other versions of immoral entertainment are now available in mobiles. Therefore, the students have now tremendous fascination for the mobiles. Consequently, instead of studying, concentrate on using mobiles for sheer fun.

Another demerit is that because of the excessive use of the mobiles different companies plunge themselves into doing profitable business. Consequently, numerous towers have been erected for the network of mobiles. It is well known that a particular wave which is responsible for the mobile network does harm to the ecological balance of the environment. It is evident in the pale colors of the trees and fruits adjacent to the mobile towers.

Thus, it is the time to be conscious of the abuse of the mobiles. The concerned authority should take immediate steps to stop immoral business which is proliferating in abusing mobiles. All should remember that the sole purpose of mobile is to communicate. Entertainment may be available in the network of mobiles. But there should be no immoral design. Above all, the government should restrict the use of mobiles, so much so that anti-social activities may not be done through mobiles.