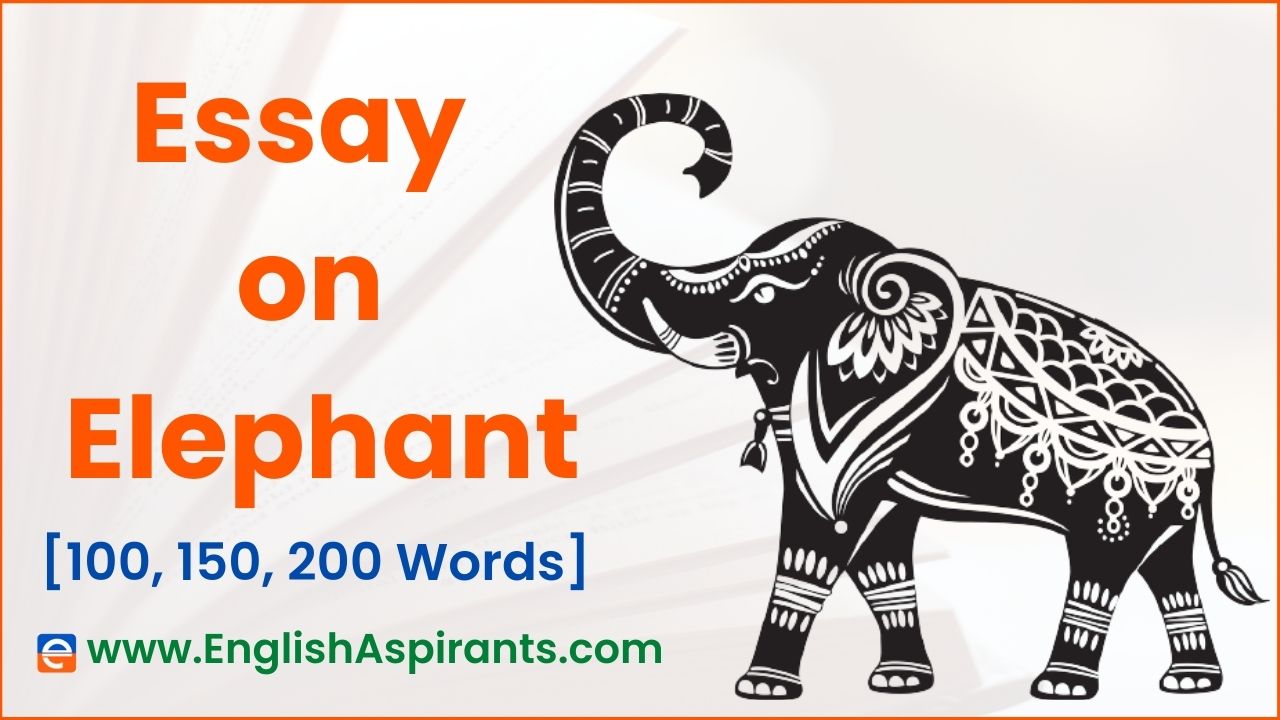 Essay on Elephant: Elephant is the biggest animal on earth. In this article, you are going to learn how to write an essay or paragraph on elephant in English. We’ve included 3 essays (100, 150, 200 words) on elephant in this post. These essays will be helpful for the students as well as children. So, let’s get started.

The elephant is one of the largest animals. Its natural habitat is thick jungle. Most of the elephants are found in the deep forests of Africa, Burma (Myanmar), India etc. But tamed elephants are very useful to man.

It has thick legs, a huge body, large ears, small eyes, great white tusks, a long trunk and a small tail. It uses its trunk like a hand. The elephant picks things up with its trunk and puts them into its mouth. It sucks water with its trunk. They are trained to draw heavy loads and to do many other useful works. 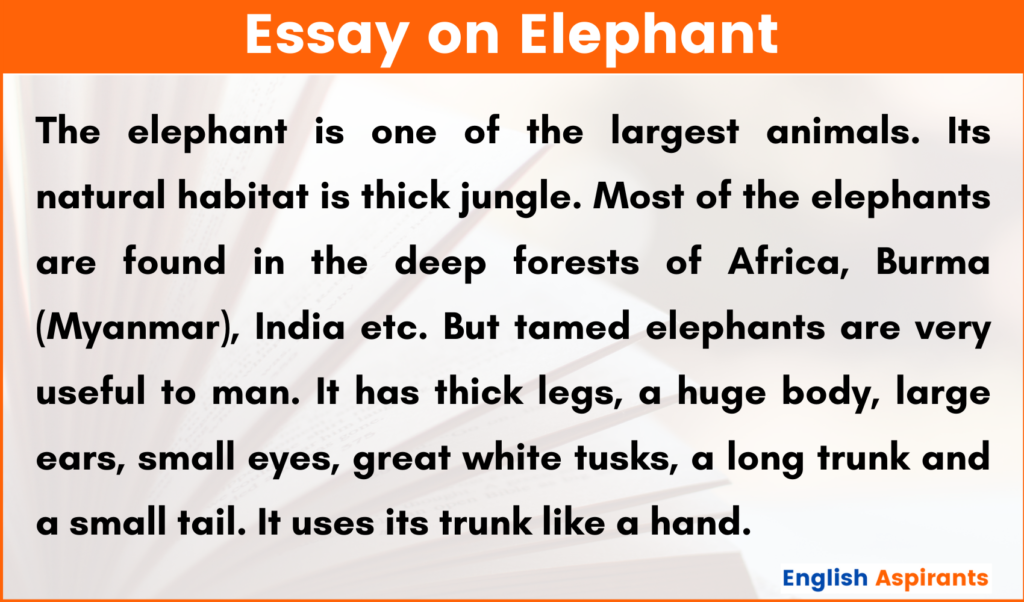 The elephant is declared the heritage animal of India. This is a just appreciation of the largest of all animals in India. This honor is also due to this animal for various reasons.

First, in Indian religion and legendary accounts, this is highly honored. Elephant’s head forms the head of lord Ganapati who is worshipped before all other deities.

Moreover, this is perhaps the largest of all animals and quiet by nature. In Indian legends, elephants are also described as effectively used on battle-fields. In a good many parts of the land, this is tamed and made to work to please and serve human needs.

Even a dead elephant is costly enough. Its ivory tusks are very valuable. Its strong bones are used to form costly combs, buttons and other luxury goods. In fact, this animal is held in our land as a symbol of love and friendship. Preservation of this species is an urgent necessity. 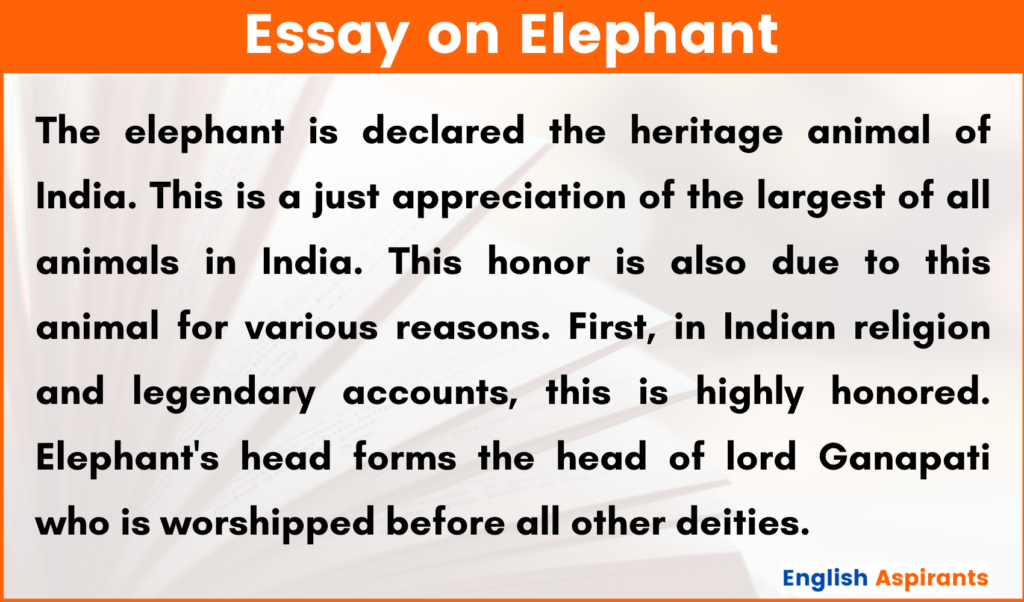 The elephant is the strongest and biggest animal on earth. It is dark gray in color. It is one of the most intelligent animals. Elephants can live up to 70 years. They travel in family groups called herds. Elephants can be trained and used for various purposes.

The eyes of the elephants are very tiny. They have two enormous ears, two strong and sharp white tusks, four legs, a long trunk, and a short tail. Elephants use their long trunks to suck up water and squirt it into their mouth. They also use their trunk for breathing, smelling, touching, feeding, lifting objects, etc.

As the largest of all land mammals, African elephants play an important role in balancing natural ecosystems. Unfortunately, elephants are disappearing fast due to habitat loss, poaching etc. The tusks of elephants are made of ivory for which Elephants have always been hunted. It is our duty to protect our heritage animal. 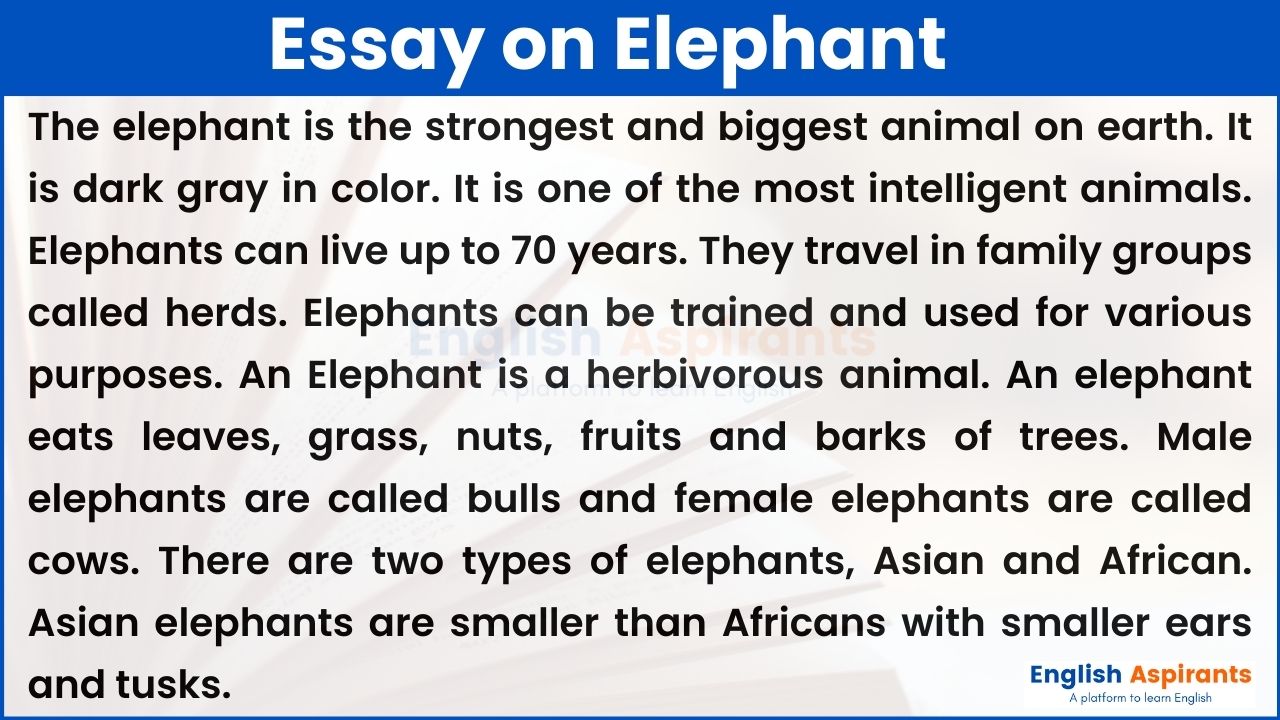